Diana Merkir, 45, was a fitness instructor herself, but bad habits were holding her back. Now she’s sharing how she lost nearly half of her weight with the help of a top trainer and an ambitious goal

TIME FOR A CHANGE

Diana had been a fitness instructor and a personal trainer for over a decade, but her poor diet was keeping her from achieving her fitness goals. At 34 years old, after giving birth to her daughter, she was carrying 206 pounds on her 5’2” frame. That’s when she decided it was time for a real change. 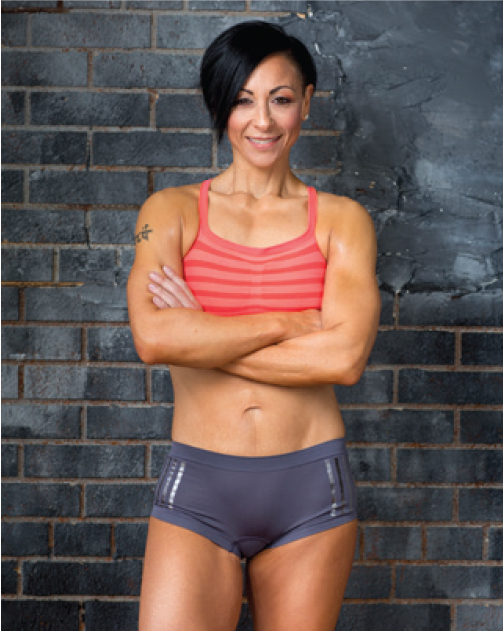 Although she was a fitness instructor herself, Diana was not above reaching out for help. She joined the Elite Fitness Team in Brantford, Ont., and enlisted Nicole Dumont to nudge her onto the right track. Nicole set her up with a personalized nutrition plan and encouraged her to cut out junk food. She also helped Diana get serious about weight training.

You can’t out-train a bad diet,” Diana learned. “I thought I could eat whatever I wanted because I was working out. Well, that was not the case at all. It doesn’t matter how much or how hard you exercise; if your nutrition isn’t on point then you won’t reach your fitness goals.”

Before Diana started her transformation, she lacked confidence. She found herself staying home more often instead of going out with family and friends. However, Diana turned her insecurities into her biggest motivator: she decided to train for a photo shoot. This goal kept her focused and driven. In just over a year, she dropped 56 pounds and credits 90 percent of her progress to her new eating habits.

A fitness journey like Diana’s rarely comes without setbacks. Diana’s greatest challenge came when she discovered she would need a full hip replacement. “I began to feel sorry for myself and fell off track,” she recalls. Her trainer helped her get back in the game by focusing on upper-body and core workouts. When she got back into her groove,

IF YOU FALL OFF TRACK, YOU MUST GET BACK ON

she started to feel better about herself again. “If you fall off track, you must get back on,” she recommends. “Don’t dwell on it. It’s done, it’s over. You only fail when you give up.” After getting her hip replacement, Diana redoubled her resolve to do a professional photo shoot. She knew that everyone experiences adversity and she wanted to prove that those difficulties are no reason to give up on your goals. Diana showed that we can’t always control our circumstances, but we can control how we handle ourselves during tough times.

DIANA AT A GLANCE

PERSONAL MANTRA
If it doesn’t challenge you, it won’t change you.

Diana has now reached her goal weight of 110 pounds. Some of her family members didn’t even recognize her when they saw her at a wedding. She’s thrilled about her progress, but her journey is far from over. Clients, friends, and family often ask her what she’s training for now. “Life!” she replies. She still struggles to find balance sometimes, but she’s taking it one day at a time. Diana now feels much more confident and happy in her own skin. She enjoys going out with friends and family, and she wants to use her experiences to help others feel good about themselves. She wants other women to know that they are allowed to fail or have bad days — but they can still get back at it..