The Middle East offers an incredible diversity of cultures and perspectives, and Sandra McCleod was eager to experience it herself. Here, she shares her favourite destinations in Israel and Jordan. 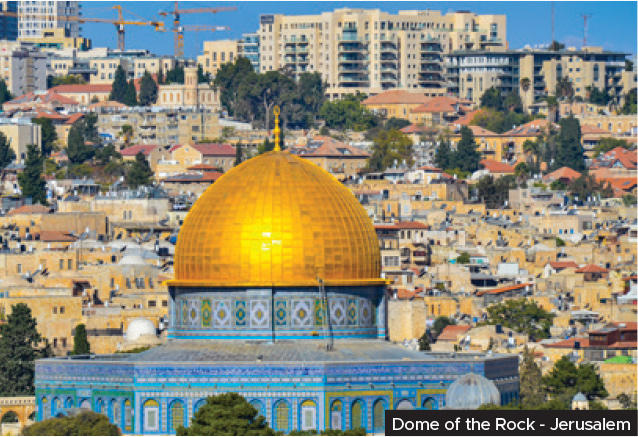 Travel opens our eyes and allows us to experience another culture’s history, art, and way of life. Often, learning about the lives of others makes our own more fulfilling. Our journey started aboard a small cruise ship from Athens. From there, we crossed the Mediterranean Sea to reach the shores of Israel. We then journeyed through the Suez Canal and up the Gulf of Aqaba to Jordan. Whether you’re hoping to marvel at the feats of ancient engineers or lay eyes on landscapes that will take your breath away, these two countries will not disappoint.

Jerusalem, a sacred city to Jews, Muslims, and Christians alike, is a study in chaos and contrasts. Its ancient walls have been marked by countless conflicts, and yet innumerable cultural groups have carved out a place for themselves while adding to the rich artistic, historic, and culinary tapestry of the city. Whether you are there to worship or simply to admire the spectacular sights, capped by the shimmering Dome of the Rock, this electrifying city is not to be missed.
First, visit the Western Wall, the only remaining part of the Second Temple of Jerusalem. The wall has been a sacred Jewish landmark and a place of pilgrimage in the Old City for two millennia—the entire plaza seemed to be flooded with emotion. After witnessing devout Jews weeping as they mourned the destruction of the temple, we experienced firsthand why the site is alternatively known as the Wailing Wall.
For a taste of Christian history, enter the Garden of Gethsemane at the foot of the Mount of Olives, where Jesus is thought to have prayed the night before his crucifixion. This garden is credited as the site of history’s greatest betrayal: when Judas revealed Christ’s identity to his captors, which lead to his arrest and death.
Continue to follow in Christ’s final footsteps by walking the cobbled streets of Via Dolorosa, or the Way of Suffering, along which Jesus is said to have carried the crucifixion cross through jeering crowds. Then visit the Church of the Holy Sepulcher, believed to be his final resting place. There, it was my turn to be moved to tears.
Visiting Jerusalem was the most moving experience of our journey. Regardless of your faith, the opportunity to explore the places described in ancient holy texts will touch you to the core. 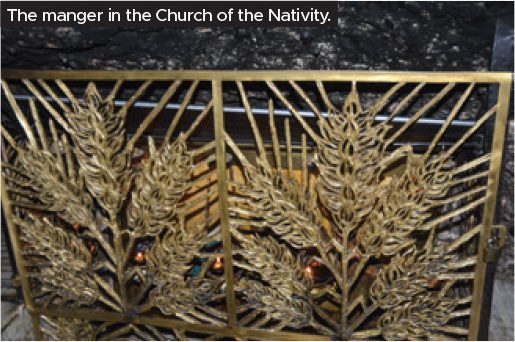 Far from a sleepy town filled with barns and managers, Bethlehem is now a pulsating hub of activity in the West Bank. There you can visit the sacred Church of the Nativity, a place of worship thought to mark Christ’s birthplace. It is hard to put into words the incredible feeling we got upon entering the basilica—the pure magnificence of the soaring columns, shining gold artifacts, and glistening chandeliers left us in awe. The 1,700-year-old
Church of the Nativity has withstood earthquakes, fires, and invasions, including a 2002 siege during which Palestinians took refuge in the church for weeks. Despite its resilience, the basilica’s future is in jeopardy. Its roof is rotting, and the three rival Christian groups that take care of the church have not been able to agree on how to fix it. Now would be the time to visit this holy site and appreciate its rich past, before it disappears into the mists of time. 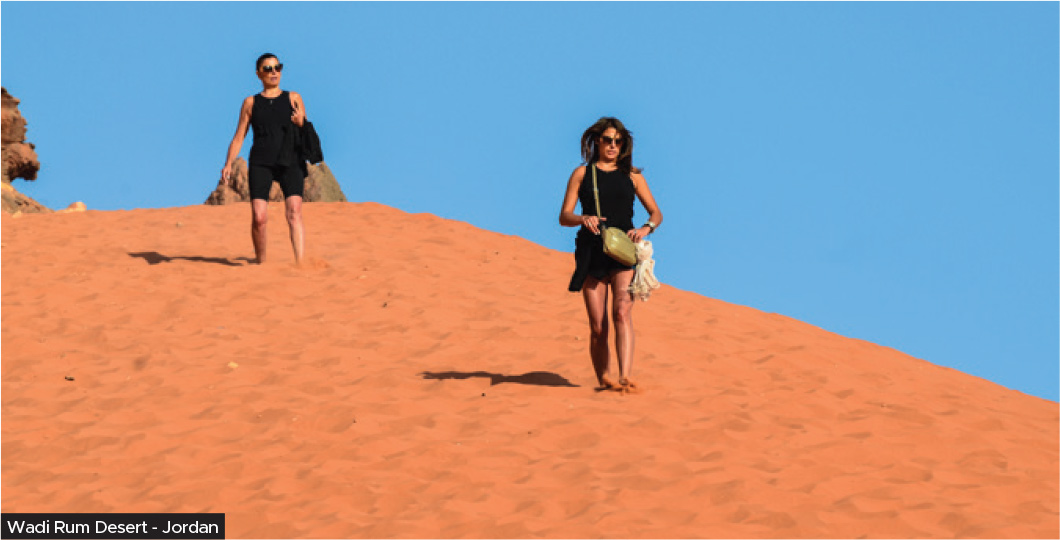 For a taste of breathtaking desert landscapes that have more in common with the surface of Mars than the bustling cities of Israel, venture to Wadi Rum in neighboring Jordan. Speeding through the desert in the black of night in a Jeep 4×4 was surreal—huge mounds of sand appeared before us, illuminated only by our headlights and by the thick carpet of stars above us.
If you’re in the mood to splurge, stay at a luxury camp run by Bedouins, nomadic people who have made the desert their home for generations. There you’ll savor traditional regional fare such as Zarb, a Bedouin version of barbecue that is slow-cooked for several hours in an underground pit.
In the morning, set off again to investigate smooth, sandy dunes and otherworldly rock towers—it’s no coincidence that many sci-fi movies were filmed here, including The Martian starring Matt Damon. More adventurous travelers can even play Lawrence of Arabia for a day by mounting a camel and setting off to explore. Just watch out for the spit! 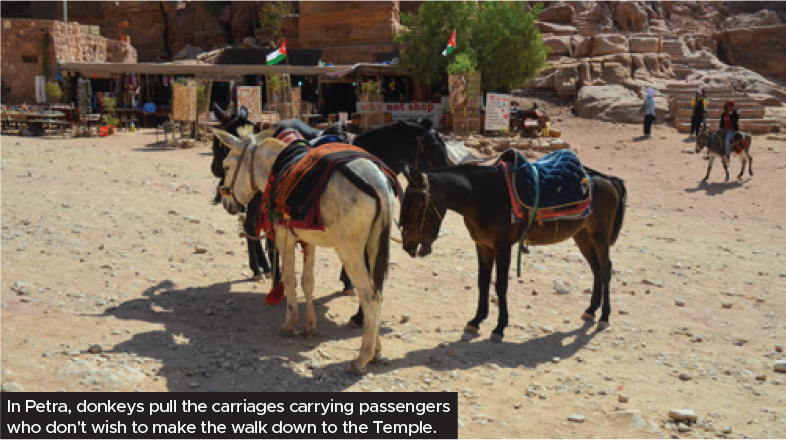 Few ancient cities are as fabled as Petra, an impressive Nabataean capital carved into a sheer rock face. Also known as the Red Rose City, Petra is set in an isolated valley encircled by craggy mountains. To get there,
you’ll hike through an imposingly narrow gorge engraved with carvings. I couldn’t help but imagine actor Harrison Ford riding through that same passageway in Indiana Jones and the Last Crusade.
My reverie was interrupted as I caught my first glimpse of the Red Rose City. Before we stood the awe-inspiring Treasury, a marvel of ancient engineering thought to have held a formidable treasure. You’ll find it difficult to imagine a prize that would be more impressive than the building itself.
The Treasury may dominate the postcards depicting the ancient city, but Petra has much more to offer. Climb (or ride a donkey) up to the Ad-Deir monastery for breathtaking views from one of the city’s best-preserved buildings. Examine the tombs for evidence of Egyptian and Greco-Roman influences. Or for a truly magical experience, visit at night when the storied pathways are lit by candles and traditional Bedouin music echoes off the canyon above. Whatever route you choose, Petra will remain etched in your memory long after you leave its rose-hued walls behind.