Mary-Frances Dulny learned how to push herself — and when to give herself a break. Now she’s sharing her top tips on how to stay motivated

AN EARLY START Mary-Frances did her first squat when she was 15. She was under the watchful eye of her brother John, a university linebacker. From then on, she was hooked on lifting weights. John had written “get uncomfortable” on a small chalkboard beside his squat rack, and these words set the foundation for
Mary-Frances’s attitude about fitness. “I love the idea that strength comes from pushing yourself to the point where it’s uncomfortable,” she says. “I really do believe that change happens only when we truly challenge ourselves.”

OVERCOMING OBSTACLES Weight gain had always been a problem for Mary-Frances. In her first year of university, she gained 30 pounds. She felt

heavy and uncomfortable, and she realized that she’d been taking her body for granted. It was time for a change. Mary-Frances recommitted to lifting weights, and she instantly felt energized. From there, her progress was slow and steady — but her journey was rarely easy.

In her mid-thirties, Mary-Frances was faced with a new obstacle: losing pregnancy weight. “Anyone who’s been pregnant can probably relate to this,” she muses. “After the baby arrives, your body is forever changed.”
Mary-Frances weighed 209 pounds in the ninth month of her first pregnancy. Six months after giving birth, she headed back to the gym. But instead of treating working out as just another chore, she thought of it as
an escape from her new responsibilities, and a place to rediscover herself. The gym is an important place where she can go to focus on herself and her passion.

SETTING A NEW GOAL At 38 years old, Mary-Frances set a goal to enter a fitness competition before turning 40. She turned to trainer Nichelle Laus for guidance. “Nichelle has taught me to train smarter and really push my limits,” Mary-Frances recalls. To prepare for her competition, she lifted heavier weights and adopted a strict diet. She believes that diet plays the most important role in any transformation. “If we’re not putting the right things in our bodies, then we’re doing ourselves a disservice,” she maintains. Mary-Frances followed a simple diet plan that incorporated diverse foods with healthy fats, protein, and clean carbohydrates. The results she saw led her to compete in not one but four competitions before turning 40. 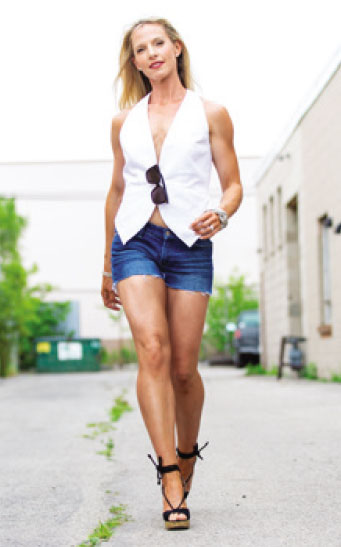 A SERIOUS SETBACK In 2016, Mary-Frances experienced adrenal fatigue. She had been over-training and pushing herself beyond what her workout plan asked of her. “I thought that doing more would lead to better results,” she recalls, “but I learned the hard way that this isn’t the case.” Mary-Frances sought out naturopathic doctors to help her get back on track. During this process, she learned more about understanding her body. She says that understanding and accepting her limitations helped her to move past them and become stronger than ever.

STAYING MOTIVATED Mary-Frances loves that getting stage-ready is only a 14- to 16-week process. She stays motivated by reminding herself that her strict regimen is temporary, and that she’ll be able to indulge after the show. That being said, she knows her journey to achieve her best body and to find balance is far from over. She sees herself continuing to lift weights for the next 40 years. “I believe that I’m laying the foundation now for a long and healthy future,” she proclaims. “Not only does fitness increase my physical abilities, but it also heightens my mental ones and allows me to live a fuller life. I feel a heightened sense of confidence after a great workout, and I’m encouraged to take on the day’s tasks with optimism and a renewed appreciation of my mind, my body, and my life.

No Easy Way Out

Today is a New Day