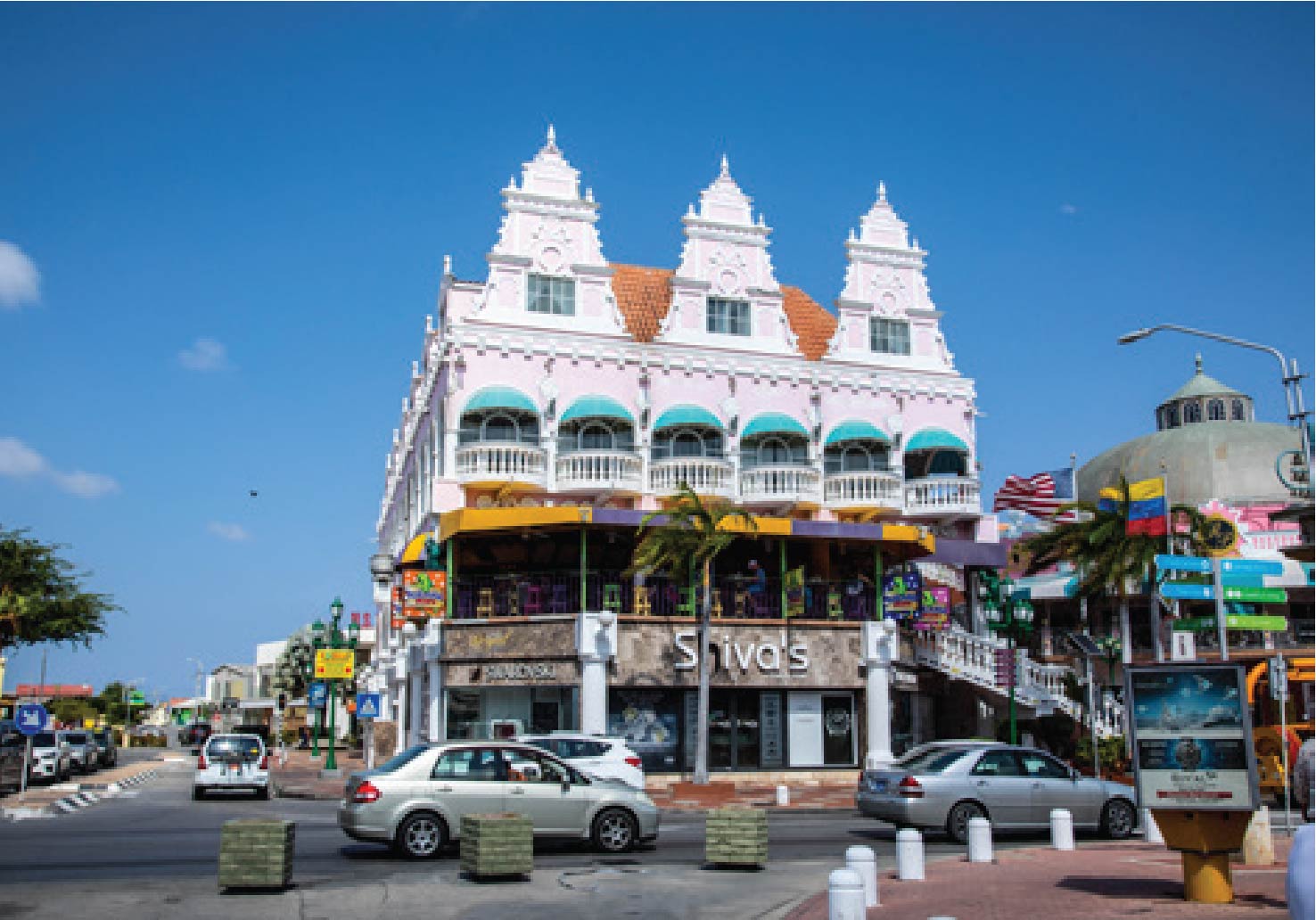 Forget everything you think you know about the Caribbean—on the ABC islands, you’ll find European cafés and windswept deserts rubbing shoulders with picturesque beaches and world-class dive sites.

If your dream vacation involves palm trees, mojitos, and not much else, you should probably pick elsewhere in the Caribbean. But if you like exploring charming European cities or trekking through otherworldly deserts as much as you like lying on white-sand beaches, the ABC islands can offer you the experience of a lifetime. The ABC islands sit just north of Venezuela, forming the westernmost islands in the Lesser Antilles. The Spanish arrived in Aruba in 1499 and displaced many of the local Caquetio people. The Netherlands took over the ABCs in 1634, and the islands are still known for their Dutch flair. They all have plenty of dive sites, beaches, and cultural hotspots, but each of the islands retains a distinct feel. 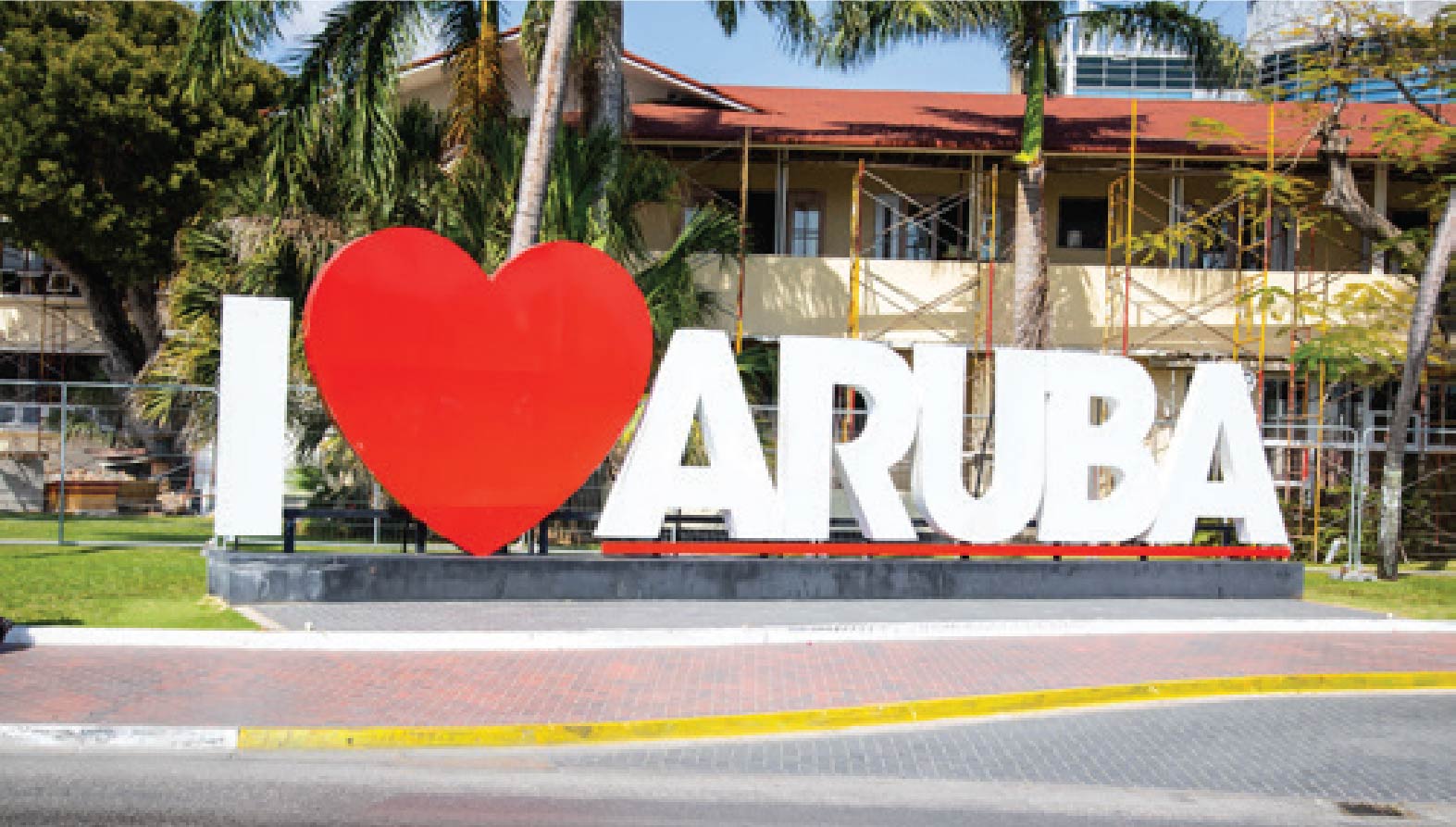 Aruba is the smallest of the ABCs, but it’s also the epicentre of high-end resorts, casinos, and buzzing nightlife. Pick a hotel near Palm Beach and luxuriate on white sand, or head to nearby Eagle Beach to go jet-skiing or wakeboarding in crystal-clear waters. While the underwater sights are not as impressive here as on the other islands, divers and snorkelers shouldn’t miss the wreck of the Antilla, a 400-foot-long German freighter.
Unlike most Caribbean islands, the ABCs have an extremely dry climate and an abundance of deserts. To get a sense of Aruba’s unique landscape, head to Arikok National Park. There you’ll find

limestone cliffs, vast caves, and sand dunes— not to mention Aruban rattlesnakes and a host of other interesting creatures. You can tackle the park on foot or in a 4×4. Just don’t forget to pack a bathing suit so that you can cool down in the park’s natural pools!
For more hiking opportunities, check out the impressive Ayo and Casibari Rock Formations. Meander between slender cacti and hulking boulders, and then climb to the top of the rocks for sweeping views of the Aruban landscape.

When hunger strikes, head to the Pastechi House, the best little food stop in all of Aruba. Pastechis are an Aruban take on empanadas, and each bite of one is like a miniature history lesson.
The pastiche’s shape and pastry shell come from South American cuisine, while its filling is influenced by African, Indonesian, and Dutch flavours. This tasty fried snack reflects the cultural diversity of the island and is often eaten at Aruba Day parties to celebrate the nation’s independence. 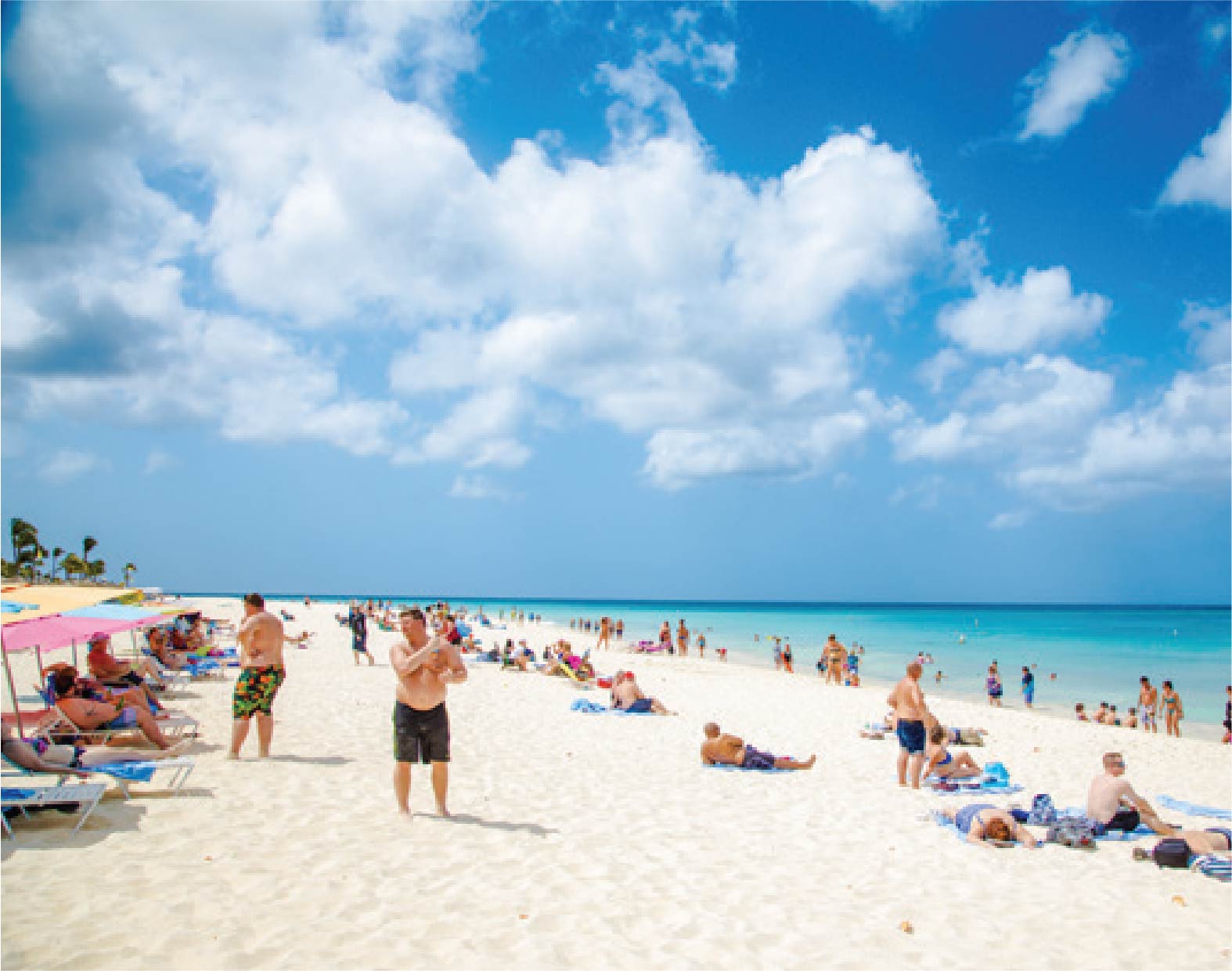 Bonaire, a special municipality of the Netherlands, is the least developed of the ABC islands. If you prefer a slower pace or if you’re serious about diving, this is the island for you. Bonaire’s stretch of reef is often touted as the best in the Caribbean, and many of its dive sites are accessible right from the shore. Yellow rocks mark the most popular spots.
Divers will swoon over Bonaire, but you don’t need to be Jacques Cousteau to see everything that the waters have to offer. Non-divers can snorkel around the spectacular shallow reefs surrounding Klein Bonaire, a minuscule island off

Bonaire’s west coast. You can reach the island as part of a tour, via water taxi, or even by renting a kayak. While you snorkel, be sure to keep your eyes peeled for sea turtles, stingrays, and nurse sharks.
Bonaire offers plenty to see on land, too. The tiny island is a powerhouse salt producer, and about one-tenth of its surface is covered in stunning pink salt flats and pools. Once the water has evaporated from these pools, the salt left behind is stacked into piles 15 metres high. Bonaire’s impressive salt pyramids are a sight to behold, not to mention a photographer’s playground.
On your way back from the pyramids, stop at Pink Beach to catch a glimpse of Bonaire’s iconic pink flamingos. These birds are so popular that the island’s airport is named after them, and their nesting sites are strictly off-limits to visitors.
Animal lovers can also visit Donkey Sanctuary Bonaire, where over 400 wounded or orphaned donkeys are being rehabilitated. 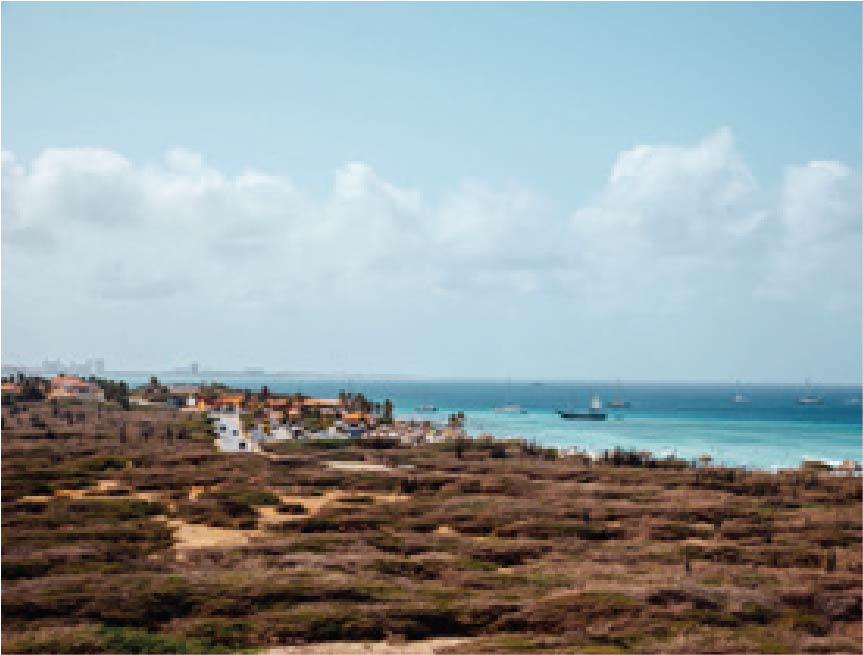 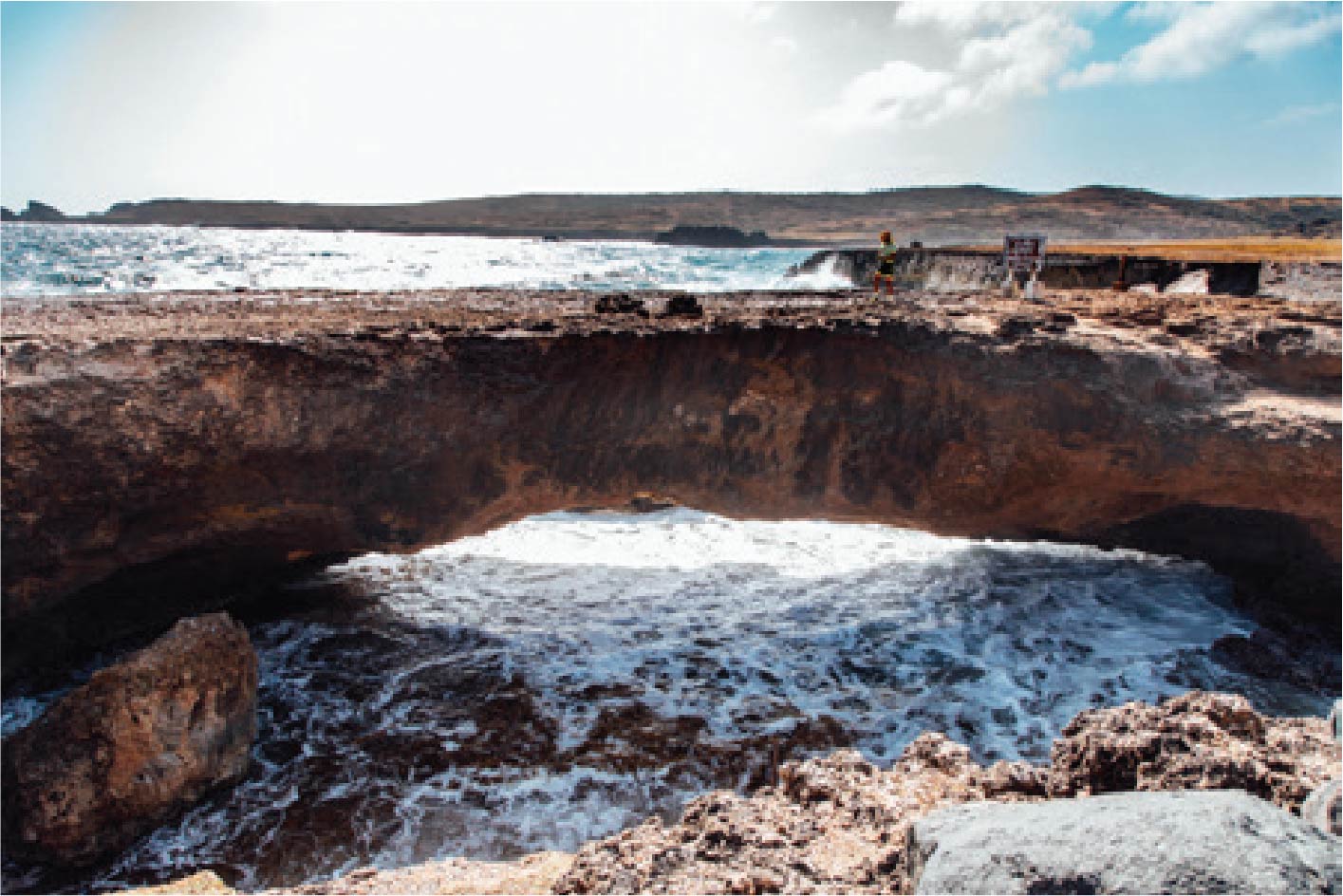 Curaçao is the biggest and most populous of the three islands. Like Aruba, it’s a self-governing country within the Kingdom of the Netherlands. If your mental image of the ABC islands is a postcard lined with bright colonial buildings, you’re probably dreaming of Curaçao.
You can easily spend half a day meandering through the UNESCO-listed town of Willemstad, a Dutch trading settlement dating from 1634. The Queen Emma Bridge, a floating pedestrian crossing supported by 16 pontoon boats, connects Willemstad’s two parts. The bridge is fondly known as the “Swinging Old Lady” because it swings open to let ships enter the bay.

Cross the Queen Emma Bridge and head to Handelskade to admire the pastel-coloured colonial buildings that line St. Anna’s Bay. Early birds can pick up fresh fish at Handelskade’s floating market, while late risers might prefer to sip coffee or cocktails at one of the street’s many outdoor cafés.
A trip to one of Willemstad’s many museums can provide a refreshingly cerebral break from mindless days at the beach. Set in a splendid colonial building, the longstanding Curaçao Museum details the Western influences on local art and culture. Meanwhile, the Kurá Hulanda Museum provides a sobering yet sensitive account of the island’s African slave trade.
A trip to one of these institutions will help you recognize Curaçao’s often-turbid past and appreciate its current diversity. 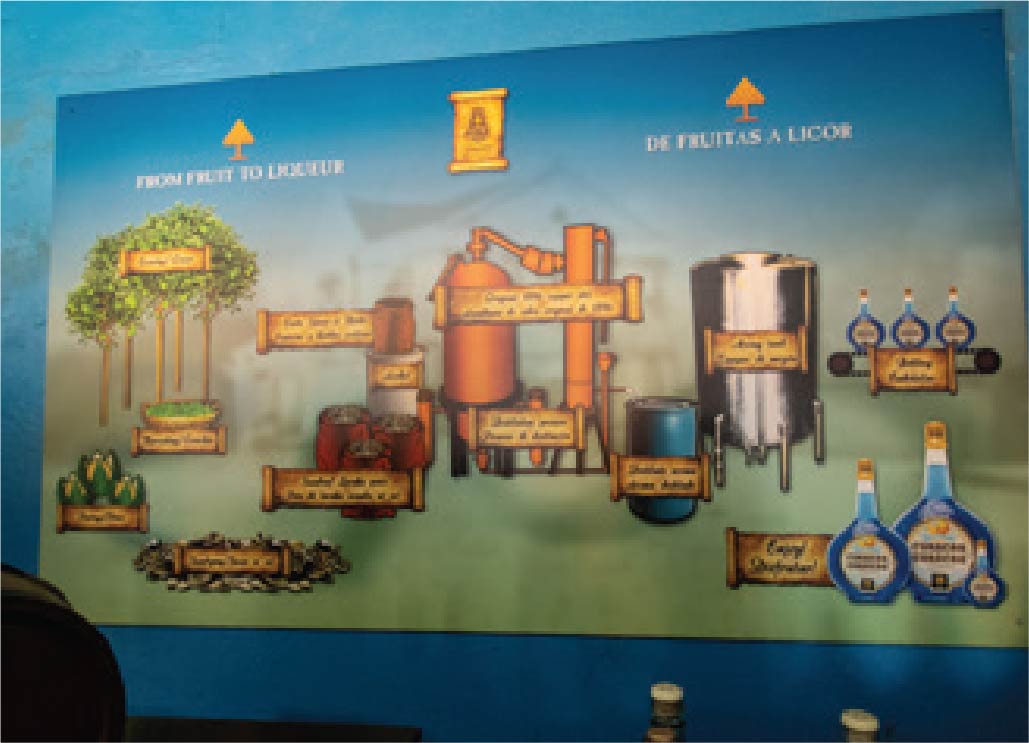 Curaçao is more urbanized than Bonaire and Aruba, but it’s no slouch when it comes to fun in the sun. Divers can see striking walls of coral and the wreck of a small plane, while golfers can hit the links at the Old Quarry Golf Course. Beach bums can relax at a resort or spend the day searching for hidden coves.
Aruba, Bonaire, and Curaçao each have their own flavour, but they share a common history, vibrant coral reefs, and a near-perfect climate. Whichever ABC island you choose, you’ll be sure to discover a Caribbean paradise with personality in spades.