FROM SAINT LUCIA TO GRENADA

When we stepped on a boat headed from Saint Lucia to Grenada by way of the Grenadines, we weren’t sure what to expect from our sailing voyage. What we discovered was everything we’d hoped the Caribbean to be—plus a few unforeseen adventures. 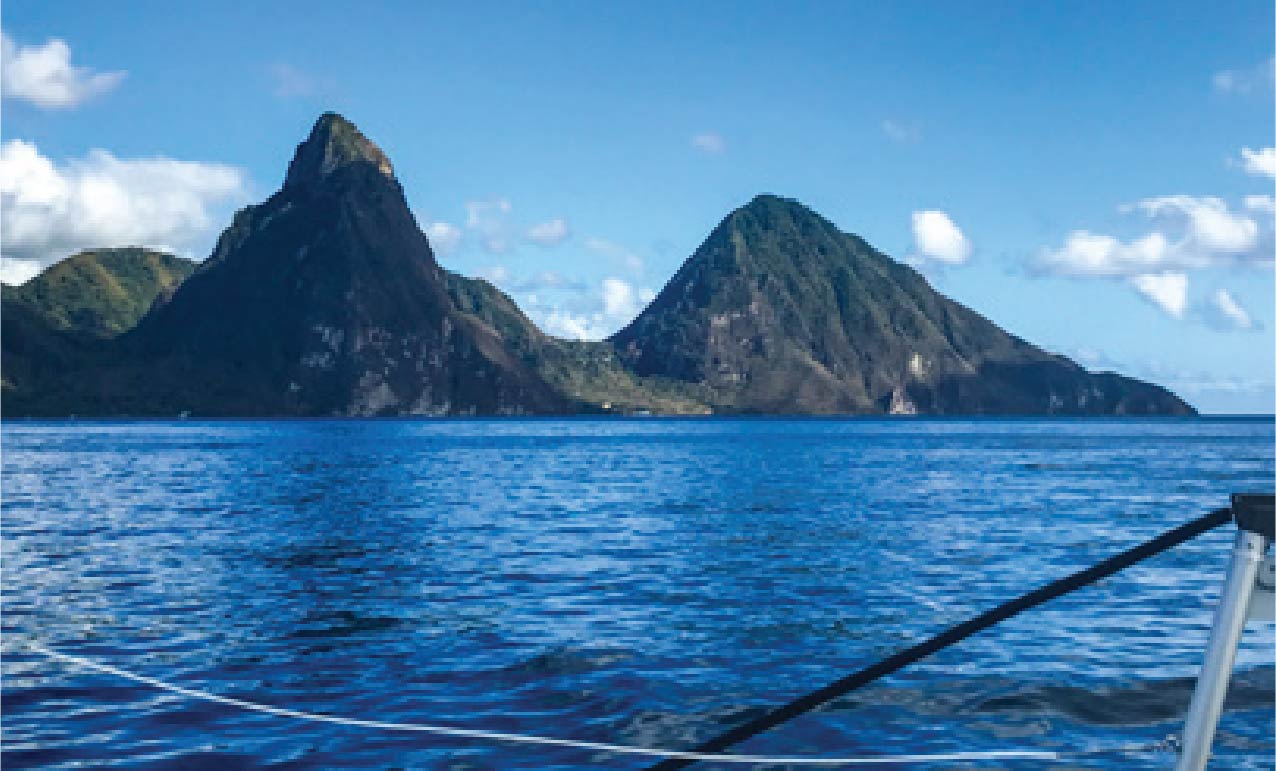 We boarded Luna—our45-foot chartered catamaran—at Rodney Bay Marina in Saint Lucia around noon. Once Captain Nim took care of clearing customs, we set sail to our first overnight anchorage next to the famous Piton Mountains. Fabiola, our first mate, and the creative chef served fresh Mahi-Mahi ceviche and a bottle of Champagne to toast the adventurous journey we were about to embark on. 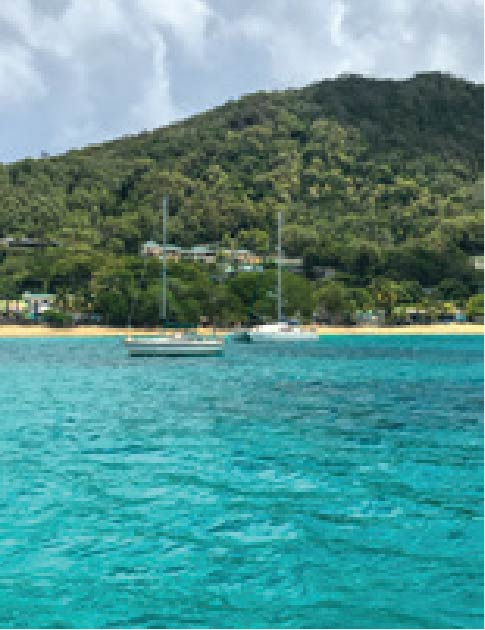 Day 2 On the Open Sea

The next day, we had an early start as we set sail toward St. Vincent and the Grenadines. During the journey, we saw some six-foot swells, and we could definitely feel the boat moving! Luckily, it was fairly easy for us to find our sea legs. We stopped in Wallulabou Bay for the night. It was a breathtaking spot and the primary set for Disney’s Pirates of the Caribbean movies. We took a dinghy to check out the beach and the movie set, which is still there as a tourist attraction. When we got back to the boat, the crew surprised us with the theme song from the movies and a swashbuckler costume for us to have our own little pirate party!

Day 3 Island of the Clouds 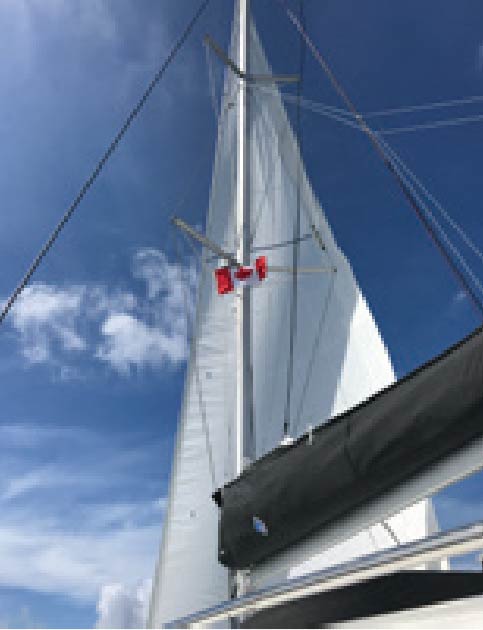 We set sail for Bequia, the grenadines’ second largest island. Bequia means “Island of the Clouds” in the Arawak language, but there wasn’t a cloud in the sky. This leg of the trip was 17 nautical miles and took us about two hours. We stopped for lunch and a snorkel, and we were lucky enough to experience the sailboats practicing for the Easter Regatta happening that weekend. 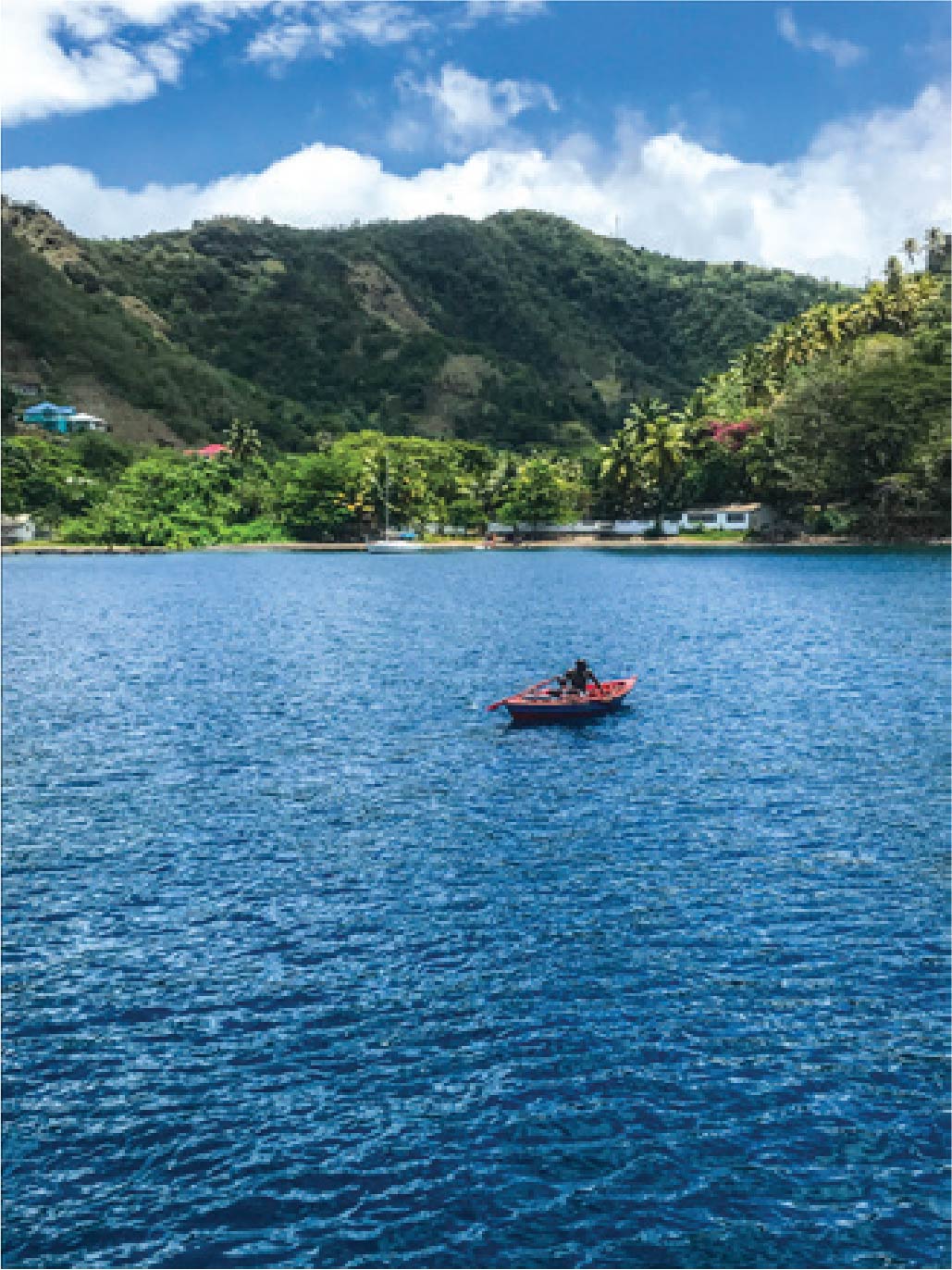 We woke up in the Tobago Cays, an archipelago in the southern Grenadines made up of five islets protected by several barrier reefs. The water was so many different shades of blue that calling it “breathtaking” would be an understatement. I spent more than five hours snorkeling that day because there was so much to see. Everywhere I looked there were colorful fish, sea urchins, conch, and stingrays. The water was so clear that I could see turtles swimming underwater from onboard the boat! Our captain took us over by dinghy to Baradal Island, where the sea turtle reserve and one of the most popular beaches are located. We followed a sandy path up to the top of a hill for a stunning view of Petit Tabac, a miniature white sand cay dotted with palm trees. 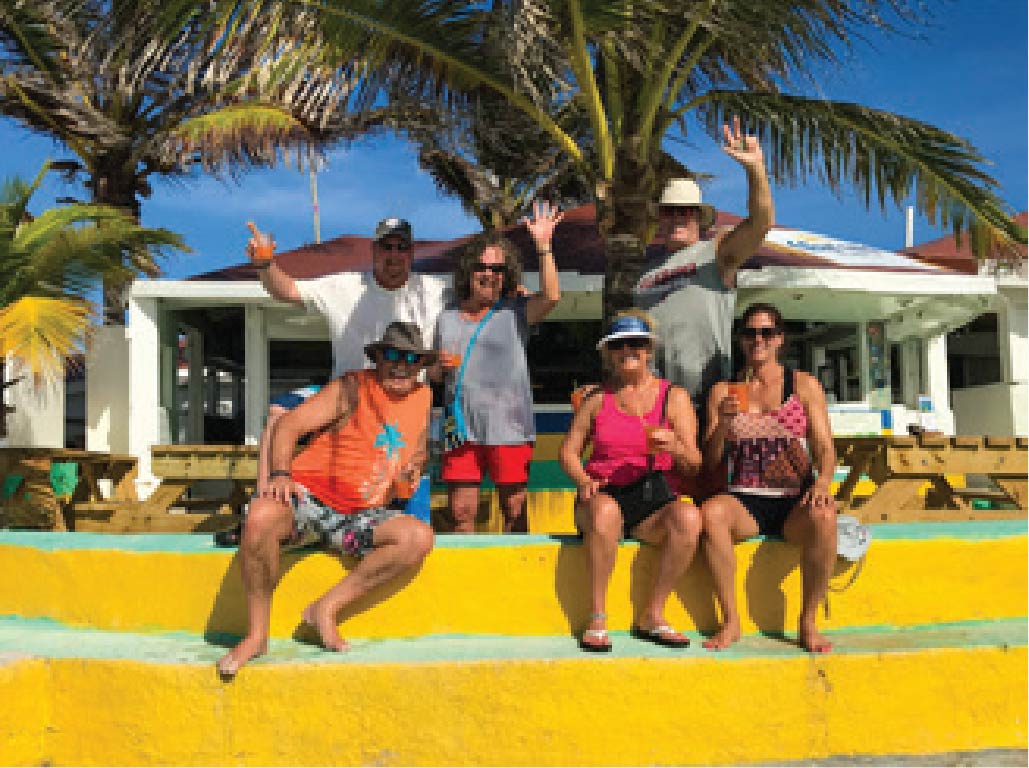 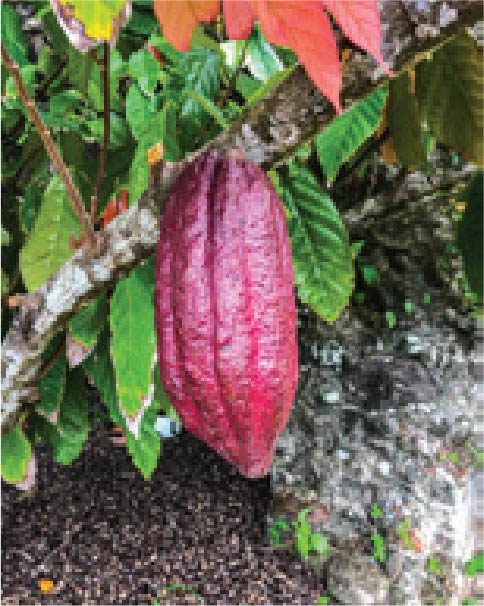 Our next stop was Union Island, five nautical miles from Tobago Cay and only an hour away. Union Island’s most popular attraction isn’t actually on the island—it sits in the middle of Clifton Harbor. I’m talking of course about the famous Happy Island, a bar, and restaurant perched on top of an island made of conch shells. As we chatted with the bar’s owner, Janti, we learned the story behind this unique island. In the early 2000s, Janti had volunteered to remove the conch shells (or lamb, as they’re called in the Grenadines)that fishermen left on the beach. Janti piled the lamb in a shallow part of the harbor, and soon enough the pile breached the water’s surface. As the story goes, visitors started to use the pile as a makeshift bar. Janti was inspired to turn the lamb pile into a proper island bar, and you can still find him mixing rum punch here today. Clifton Harbour’s conditions are perfect for kite-surfing, and people come from all over the world to show off their skills. We watched these talented men and women flip and jump for hours. I can’t imagine a better way to spend an afternoon. 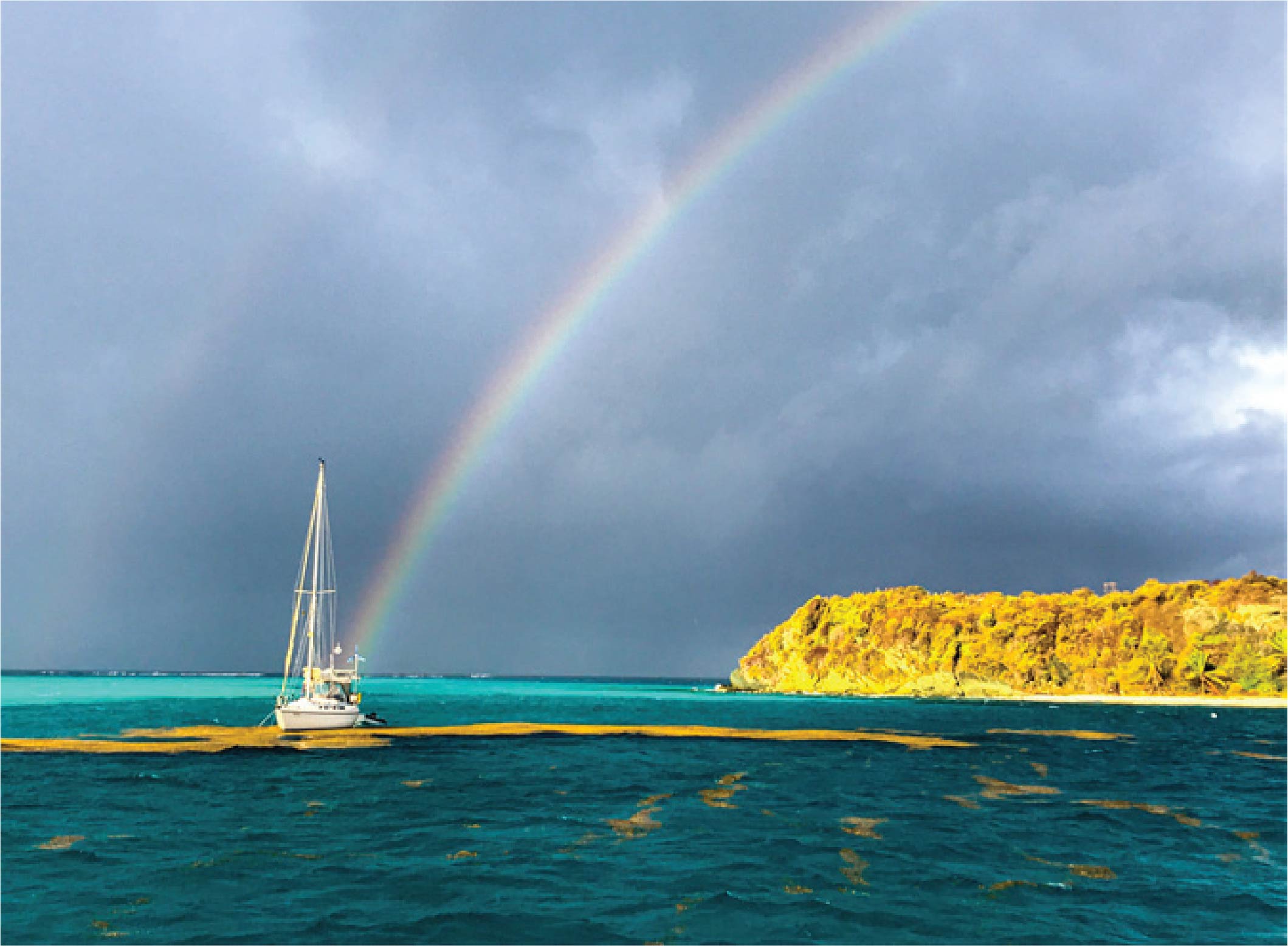 We set sail early in the morning for Carriacou, an island knows as the “Land of Reefs.” As promised, this island boasts some of the most unspoiled reefs in the region. The trip took us about two hours. These short sails were great, as we really got to experience the islands. Captain Nim dropped us off in a shipyard and we walked to catch a bus. There were no real bus stops, but a little van with a number on it was a local bus. We waved one down and decided to go wherever it might take us. The driver 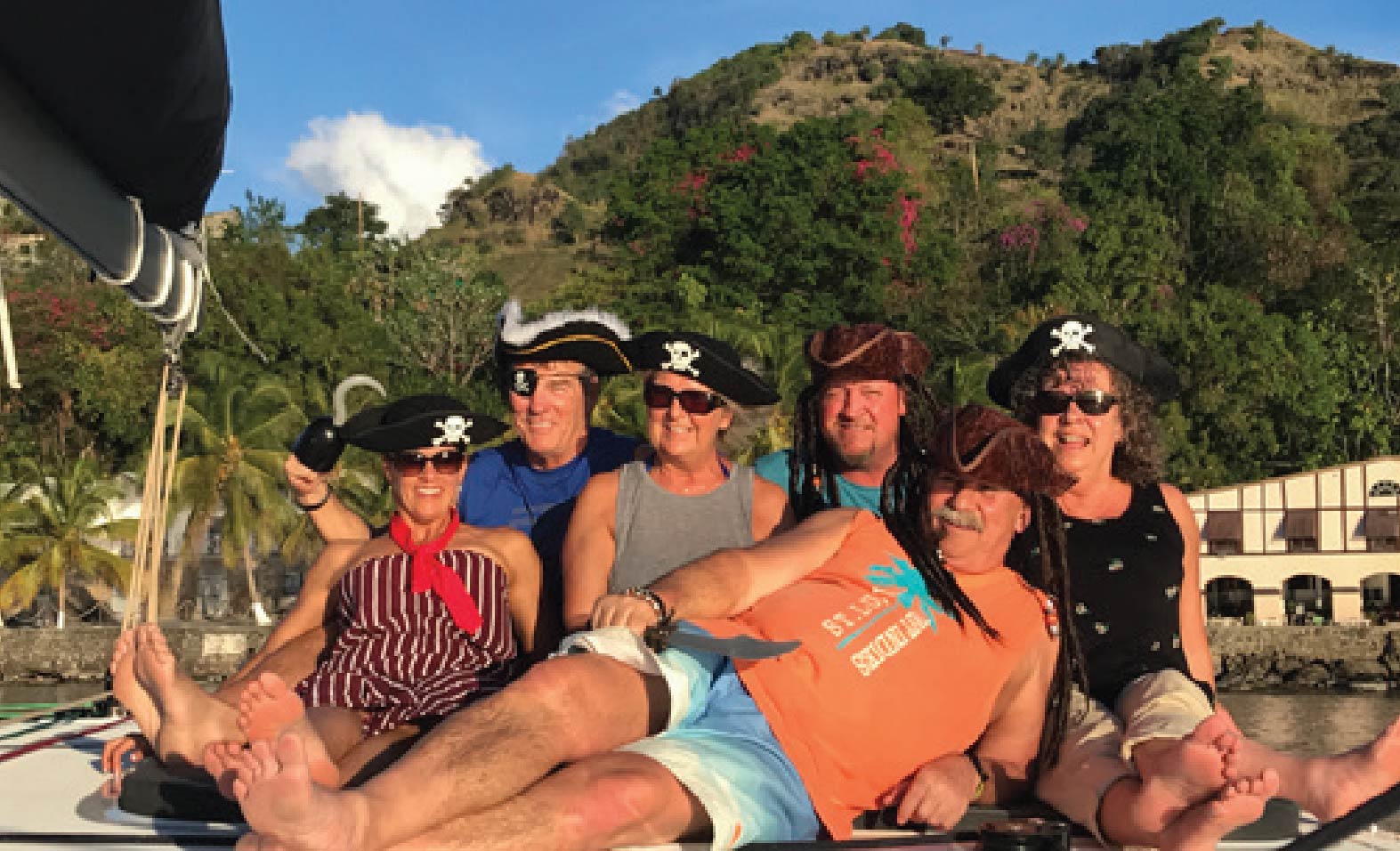 recommended Paradise Beach, where the local children fly kites and there are a few shops set up in repurposed freight containers. We met a local girl, Keisha, at one of those shops and she insisted on taking us to Sandy Island for some incredible snorkeling. She had a friend with a boat, and for a small fee, he took us there and back. In 2004, Hurricane Ivan devastated Sandy Is-land and Grenada designated it a nature reserve. Today, it’s more like a big sand bar with a handful of palm trees. There are no facilities, so it’s a great spot for a deserted island adventure. We saw beautiful coral, a nurse shark, and a spectacularly colorful parrotfish. 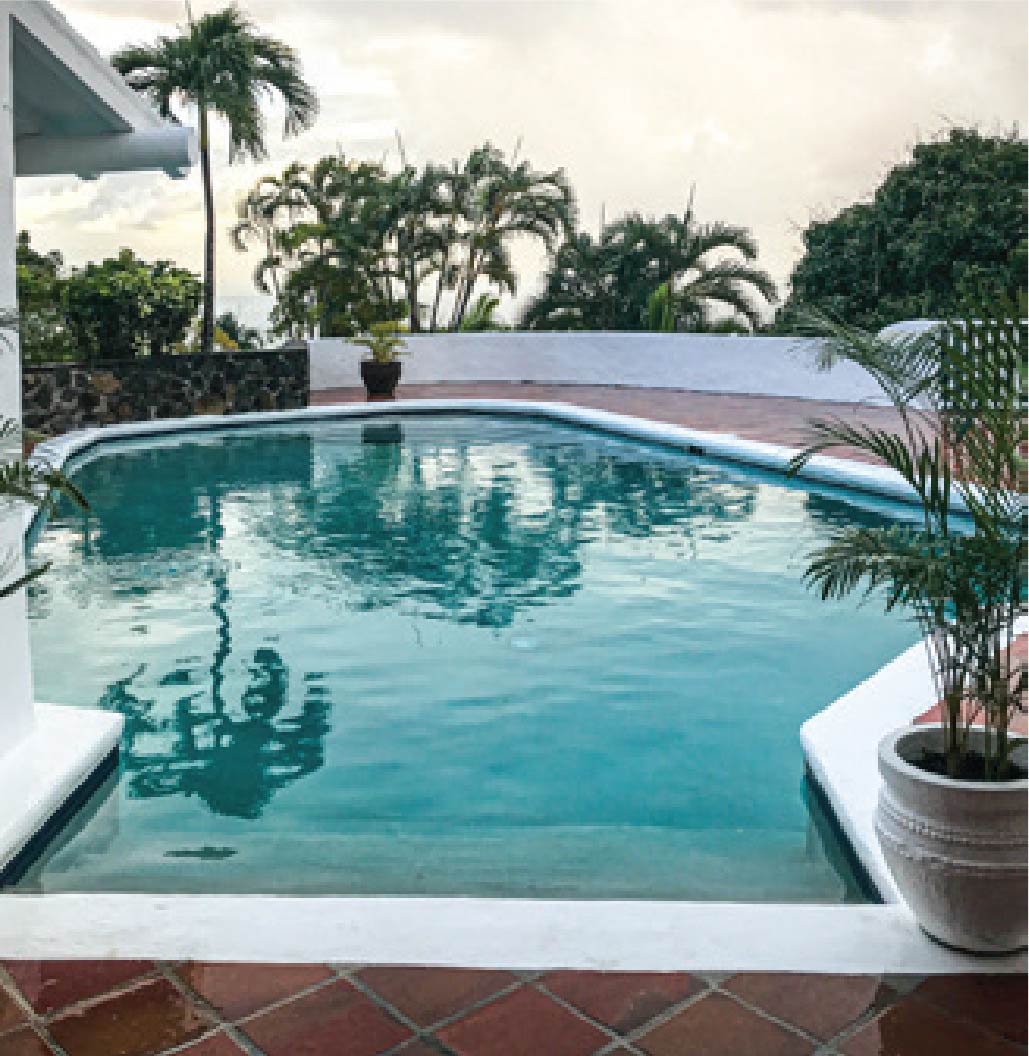 It took about six hours to reach our final destination: Grenada. These long days were great for putting the fishing poles in and hoping to catch a big one. We hooked huge sailfish, but after a quick struggle, the line snapped and it was gone. We certainly learned to appreciate the hard work that goes into putting fresh fish on our dinner plates. When we reached Grenada, we took a dip at the stunning Molinere Underwater Sculpture Park. The first of its kind, this collection of underwater art was created by British sculptor Jason de-Caires Taylor. The sculptures are scattered throughout Moliere Bay, which makes looking for them quite an adventure. The statues had a haunting quality, as many of them are being overtaken by coral. I never thought that I would be pondering art under the sea.

Day 8 Back on Land 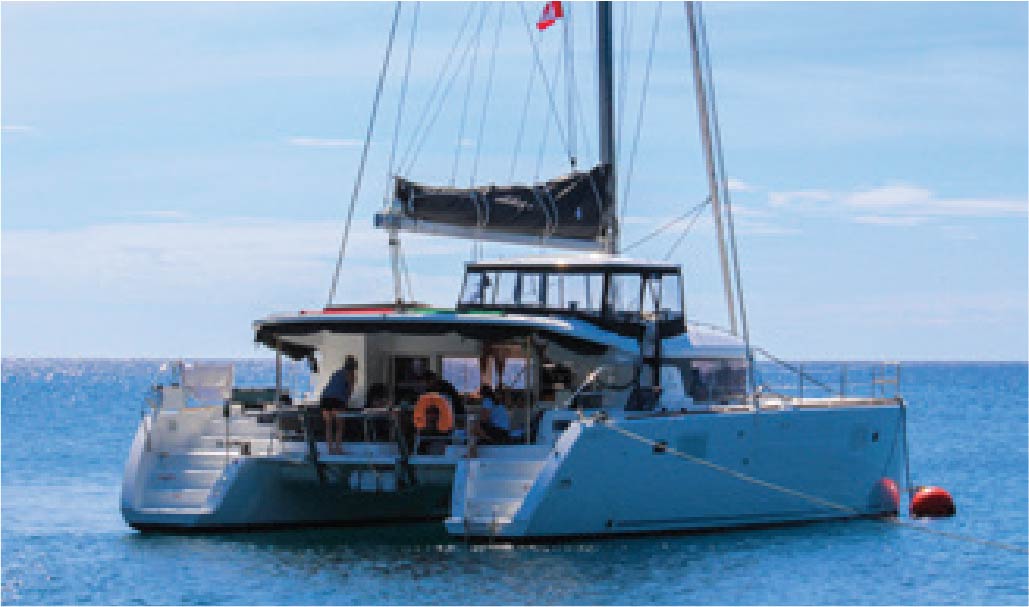 At Grenada’s Prickly Bay Marina, we said goodbye to our captain and crew and left Luna for the last time. We stayed in Grenada for three days, and there was plenty to see and do. We loved hiking to the Seven Sisters Waterfall—it was nice not to need our sea legs anymore! We jumped at the chance to sample Grenada’s local food and drink. We sipped rum at the Clarke’s Court Distillery and tasted sweets at the Diamond chocolate factory. And, seeing as Grenada is known as “Spice Island” for its nutmeg and mace production, St George’s fabulous Spice Market was not to be missed. Grenada was filled with gorgeous sights, friendly locals, and tasty treats, but a part of me still missed the breeze from Luna’s deck and the views of the open sea.