Taking a page from the book of the world-record holder: Karla Del Grande shares the ins and outs of her training, motivation, and inspiration.

What’s it take to be a champion? We look to Karla Del Grande, who’s earned more world records since she started competing at the age of 49than we can rattle off in the time she sprints 400 meters, to glean some insight on how to tap into our inner champion. This summer, she was inducted into the Canadian Master’s Athletics hall of fame, and she has no plans on stopping her domination of the track as she racks up world records. This is what we learned from the 65-year-old sprinting phenom.

I can’t remember not sprinting! My dad was always having my two brothers and me doing active things, including racing to the next hydropower across a field. I did all the usual track and field meets in elementary and high school, and was successful, getting ribbons and some school records. When I was in high school, the Ontario provincial championships (that is now OFSAA) were not offered for girls—I wish I’d protested. One of my brothers and I joined a club in Burlington, and competed in some meets outside of school, and competed in university for one year until other life activities(teaching, raising my daughter)got in the way.

Keep in a state of motion.

But I stayed active, doing cross-country skiing, aerobics, and so on until I started doing road races with a colleague in about2000 when I was about 48. I thought that was the only running available to adults. I did eight half-marathons, and many 5K and 10K races. When I was doing some sprint training at a Running Room clinic, while others complained about going around a track, I loved it, and someone told me about Ontario Masters Athletics. I checked it out, and soon got started participating in meets. I found a coach, Bruce Mitchell, who thought I had some potential, and he said he would match whatever effort I was willing to put forth. He did that, and more, and it led to me competing in Ontario, across Canada, and the U.S. and around the world, and loving the challenge and fitness it gives me, and the people that I meet. Remember that variety is the spice of life—and workouts. I usually train on the track three days per week. On other days, I do pool running, biking, or longer runs, along with weight training, circuit training, or core work. There’s always variety, and it changes because of the time of year or upcoming competitions. I compete indoors and outdoors. There’s always foam rolling, stretching(yoga-based and sometimes Pilates), and massages included as well, and a rest day. The sprint training workouts are high-intensity interval training, which has been proven to be very good for fitness, especially as we age.

Since my former coach retired, I now train with a very supportive team of high schoolers and other masters with Coach Jamal Miller, at Variety Village and Birchmount Track in Scarborough. Our master group understands the different demands on older athletes—the aging body, as well as dealing with kids, parents, jobs, retirement, or whatever. I consider myself very fortunate to have a group, especially of women, that supports, nurtures and celebrates each other. 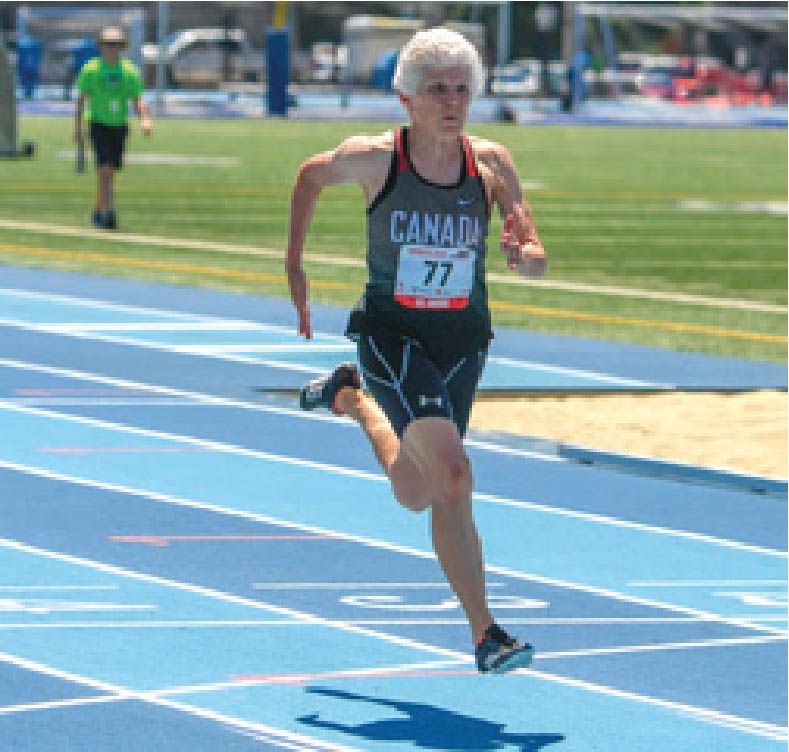 I don’t have a particular diet that I follow, but I do eat a lot of greens and vegetables, and protein (red meat, chicken, fish, or beans). I supplement that with three favorites: popcorn, ice cream, and chocolate—everything in moderation.

Breaking records is a bonus. I enjoy the challenge of the training (to try to stay feeling fast, even though slower times are inevitable) and the competing and the people so much that I’d still do this if I didn’t have that. Masters track has something called grading that compares our times to those of younger athletes, and I like to maintain high percentages. As I’ve gotten older, and received awards and recognition for my results, I’ve enjoyed demonstrating and surprising people with what women age 60 and now age 65 and older can do. It’s easy for people to underestimate a grey-haired old lady, so that can be fun. 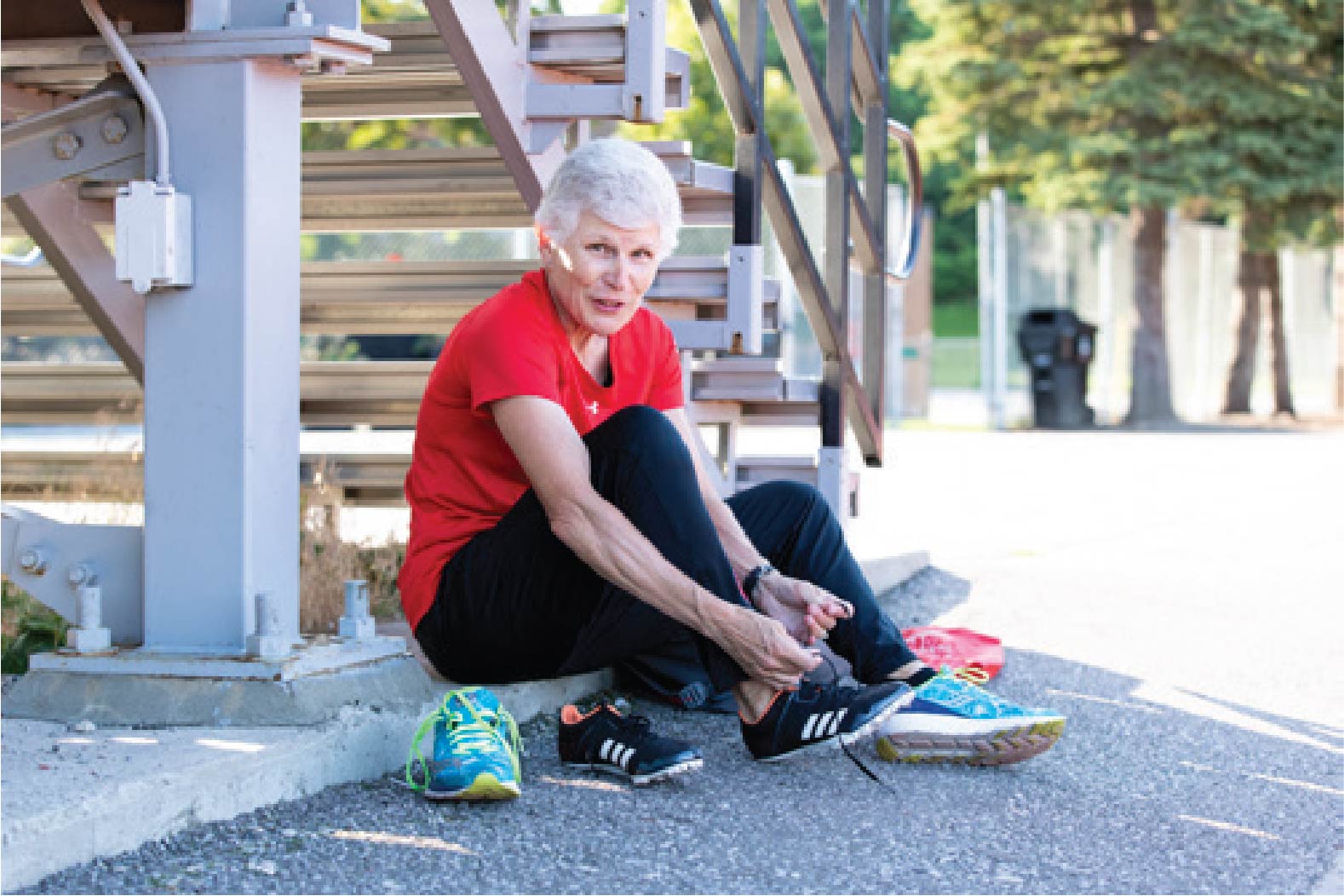 Seek out role models you admire.

My role models are those awesome Canadian women in front of me such as Olga Kotelko who started at age 77 and competed until she died at age95, and Carol Lafayette-Boyd who was World Masters Female Athlete of the Year in 2018. Both are multi-event athletes. Diane Palmason is another role model who held records in events from200 meters to marathons. All are in the Canadian Masters Athletics Hall of Fame, which I’m honored to have joined them in July.

Invest the effort into discovering a passion that makes your heart sing.

Sprinting as an adult feels amazing. Yes, it can hurt from the effort to keep the knees and arms pumping and to keep getting in enough air, but using your body in such a natural way as you did as a kid (minimal equipment, no technology, just pure running) is very energizing and satisfying. There’s a big mental component of overcoming the self-doubt when you’re on the starting line asking yourself, “Why am I doing this . . . at my age?” but it’s also very satisfying to overcome that and just run. I always loved the feeling of trying to go as fast as I could. In long-distance road races, I found that my mind wandered and the social aspects interfered with trying to get the feeling of speed. It was enjoyable but in a different way than the sprinting. I feel stronger and more powerful doing the sprints than doing the long distances. 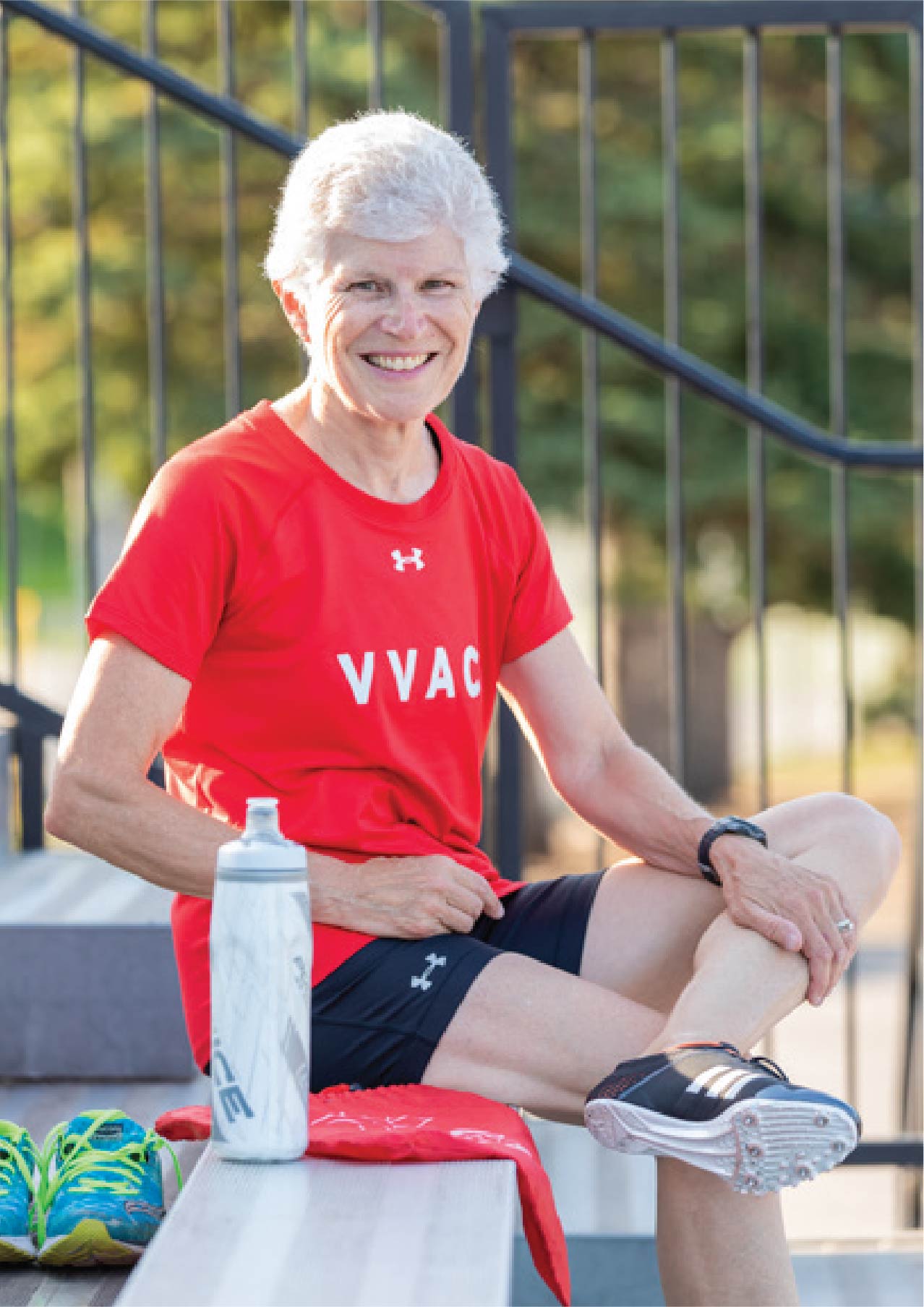 Pass on your experience and passion to younger generations.

I’m now retired from teaching, but I always coached cross-country and track and field, to try to pass on my love, first and foremost, of being fit, and of the sport of running, as my particular way of fitness, to my students. I shared different “life” lessons with them, such as setting goals, building confidence by practicing, overcoming nerves, being respectful when you lose and humble when you win, etc. My students celebrated my wins when I started competing at national and world events, and that was special. Over the years, several of my students have continued to run and have achieved success. I’ve even raced at some meets with a few of them. I now officiate at Toronto District School Board cross-country and track meets, as a way of continuing to introduce my sport to a younger generation, and have done some coaching. 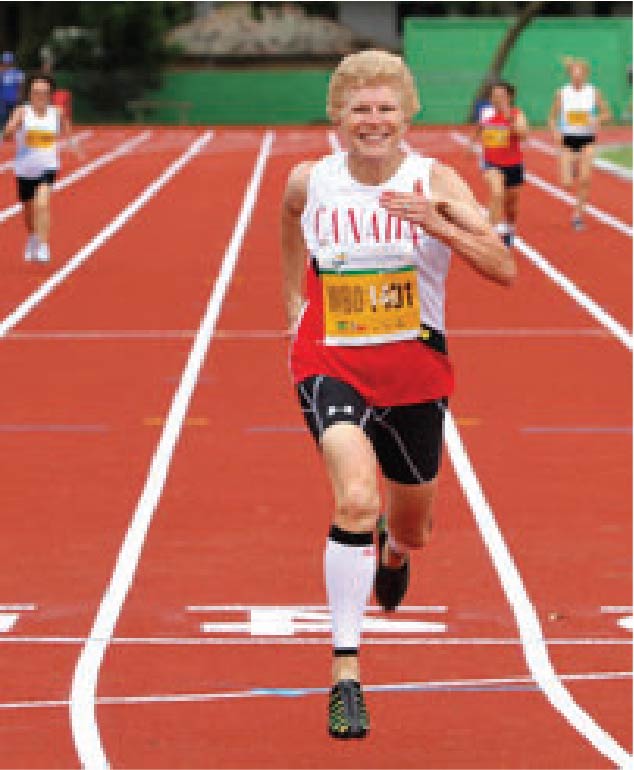 Being inspired by the role models that I have ahead of me, I can’t foresee that I will stop sprinting. I’m inspired by those who take up athletics later in life, especially those doing multi-events. Imagine Olga Kotelko, giving up softball and starting throws, jumps, and sprinting at age 77! Flo Meiler is an 85-year-old pole vaulter, setting many world records. Julia Hawkins has just been in the news for sprinting at age 103, and she started at100! Her advice is to “look for magic moments.” For me, that’s found in sprinting. I do hope that my body allows me to continue being active as long as I can. It’s not about living longer but enjoying the “magic moments” as long as I can..