Women like our cover stars Sue McErlain, Rosalie Brown, and Joan Macdonald are showing the world what being strong and healthy in your 50s, 60s, and 70s is all about.

ROSALIE BROWN, 56
Now in her mid-50s, and having started in the fitness industry before she finished university, Rosalie Brown feels as though she has grown up and evolved with the fitness industry. “I went from aerobic queen to iron maiden,” she says with a laugh. While she started with the era of the 20 Minute Workout (a televised aerobics workout popular in Canada in the 1980s), and it was the happy fun times associated with it that got her hooked on fitness, she progressed along with how the world of fitness changed. “First high impact, then low, then step and spinning, and then more bootcamp-style classes,” she says. And then she had hip-replacement surgery, which made her nervous, but she realized that she could maintain her physique with more strength training. Currently her workouts focus largely on strength training without much rest in between each exercise, which gets her heart rate up.

A no-nonsense approach to fitness

Rosalie believes that more and more people are realizing the difference between exercise and physical recreation, and that in order to get the results you want and to make your recreation more fun, you need a good exercise program. “Being healthy is quite an achieveable goal for people.Getting your walking in and
keeping moving are great, but to change your body, you need to have a good, serious exercise program,” she
says.And by that, she means going back to basics with squat and lunges. “Some people like to be entertained with their fitness, but I don’t agree with that. You should have a no-nonsense program that allows you to be entertained in other aspects of your life! So that when your family invites you on a hike, you can say yes. When my son asks me to play tennis, I can say yes; and that’s because of the sessions spent on serious exercise.”

Good health allows us to play in this game of life

“Being an older trainer, I realize how our bodies age. And when I first started training, you’d never hear ‘40 is the new 30’ and ‘70 is the new 50.’ Now you are and women are embracing weight training more than before,” says Rosalie. She shares that she more recently learned that there are certain cultures who don’t like women to look muscular. “But that’s slowly starting to change. When I teach group classes, I stress how as we get older, the way to maintain independence and quality of life is through strength and cardiovascular fitness,” she says. While she acknowledges that it gets harder as we get older, she says that if you stay on top of it, you can combat muscle deterioration and the slowing of your metabolism with an efficient strength workout. “We’re all working out in this game of life, and to get more out of life, your 30 to 60 minutes of fitness a day, five or six days a week, will make a big impact on the rest of your life.”

SUE MCERLAIN, 62
For Sue McErlain, she turned things around starting in 2011 with a simple goal: to feel healthy. “It wasn’t about
wanting to lose 20 pounds. I was going through menopause and I was concerned about lack of bone density. I didn’t want to be a woman who fell down and couldn’t get back up. I wanted to live, and to travel, and so for me, feeling healthier meant developing muscle tone,” shares the Toronto native. “And I didn’t want to wear long sleeves in the summer time,” she laughs, admitting that vanity was a motivator too. She started by giving up what she dubs “doughy
foods” (think pastas and pastries) and since she knew she wasn’t pushing herself as hard as could doing workout DVDs at home, she joined a gym that offered group classes that appealed to her. It was here that she met Rosalie.

Fast forward seven years later, and Sue is working out five days a week at the gym and is feeling healthier than ever. She has maintained her bone-density levels and remembers two particular moments when she realized her efforts were paying off. “I thought I could feel a triceps,” she shares with a laugh. “And someone said to me that we are most critical of ourselves so if you feel that it’s there, it’s there, it’s not your imagination,” says Sue. “That gave me motivation to keep going.” And the other pivotal moment? When she realized she could do a push up from her toes. “I never could and then that day I realized I could not only do one, but I could do 10.” She since worked up to 20 and her regular workouts include push-ups. Besides the physical and mental benefits of her healthy lifestyle, Sue has also found a new circle of friends. “When I started I was by myself. I’m kind of shy, and I was at the back of the class and didn’t speak to a whole lot of people,” she confesses. “Now I’m at the front of the class and I have a great network of women who also want to be healthy and enjoy their kids and grandkids.”

JOAN MACDONALD, 72
Joan Macdonald has had an on-and-off relationship when it comes to fitness. Issues including lack of results, costly personal trainer fees, being on medication (which she hates), and some health issues (everything from kidney failure to knee replacement) have all played a factor in her health as an adult. In early 2017, however, thanks to some significant weight gain becoming especially worrisome (she credits a poor diet for this), with encouragement from her daughter Michelle, a personal trainer, she signed up for her daughter’s program.

This change made all the difference. While working out at the gym on her own
hadn’t been cutting it, her
daughter’s program involved having teammates, a diet, supplements, and a set of exercises that changed monthly. “The fact that we had to send pictures of our progress weekly and our meals daily kept me on the straight and narrow,” says Joan. By June 2017, she had lost 45 pounds. “I’ve since reached my goal of losing 50 pounds, and with my doctor’s approval, I’m off all medications.”

Nowadays, Joan feels vigorous in the mornings and strong all the time. Her posture is better (“Most of the time, it’s still not ingrained, but I’m working on it!), and like Sue, she’s gained social support from people she’s met at the gym along with her family and friends. Her routine now includes one day of working on her flexibility through yoga and four days of the exercises prescribed in her monthly program. And while she doesn’t have specific goals set for herself other than maintaining what she has achieved, she is steadfast in her resolve to stay focused and disciplined, enjoy the support of the group she has found, and above all, enjoy what she has accomplished. 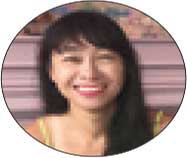