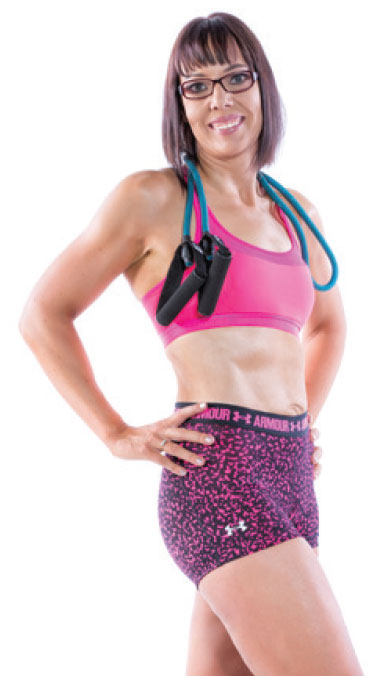 Lucy Elliott had her wake-up call at the age of 40 when she had her blood pressure tested. It had crept up to 130/90, bringing her to the borderline of hypertension — and conversely, the needle on the bathroom scale had hit 187 pounds. As a nurse, Lucy knew that she needed to start taking better care of her health – the problem, she knew, was a lack of confidence and motivation. So Lucy hired a trainer and set off on her journey of transformation.

This wasn’t the only time Lucy had tried to adjust her eating habits. She had experimented with several low-carb diets, including Atkins, and had little success. She also tried strictly limiting herself to only three meals a day. Unfortunately, she didn’t see the results she was hoping for and was frustrated that she couldn’t seem to make her body lose weight, even when she tried. It was time to add a dash of sweat to the mix. 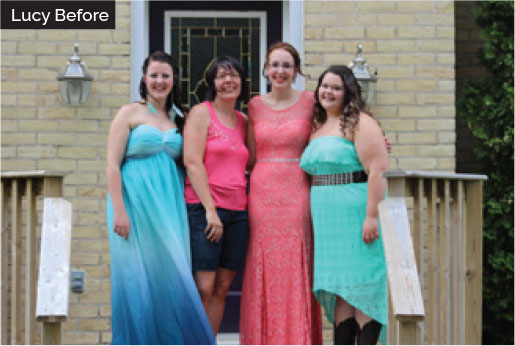 Lucy chose a trainer based on a friend’s glowing review. The advice the trainer gave her was shocking: Lucy was eating too little, not too much. Her trainer hashed out a plan that would increase the amount of food she was eating while shifting her focus from calories to whole foods and macronutrients. Basically, if a food fit the macros (carbs, fat, and protein) prescribed to her, it was fair game. The plan also included a variety of exercises, including weight training and cardio. By staying active, keeping her macros in balance, and upping her caloric intake, Lucy lost 10 pounds in the first month. 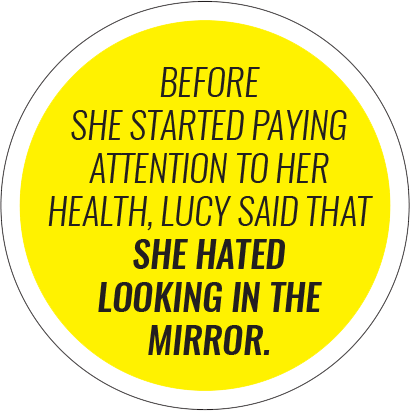 Lucy’s trainer asked for monthly pictures to track her journey. Like many others in the thick of a rigorous routine, even though Lucy had made great strides in a short time, she couldn’t always recognize the progress she was making. Her health was improving, but she was still lacking that lift in self-esteem she was searching for. So her trainer pointed out the positive changes she saw in Lucy’s photos as often as she could. After a few months, Lucy began to recognize them herself. Soon enough, friends and co-workers were noticing her transformation and showing their support.

Lucy’s biggest confidence boost came when, at 41 years old, she went to buy her first bikini. While Lucy was trying on suits, the store clerk exclaimed that she had great abs. Another milestone occurred when Lucy scheduled her first photoshoot, something she never expected herself to do. Before she started paying attention to her health, she said that she hated looking in the mirror – the new Lucy proudly says that she rocked the photoshoot.

NOT QUITE SMOOTH SAILING:

Lucy’s fitness transformation may seem like a breeze in retrospect, now that she’s down to 22 percent body fat from her all-time high of 36 percent. But, as anyone who’s made a major lifestyle change knows, there are always challenges to overcome. One of Lucy’s major setbacks occurred when she tore an intercostal muscle while weight training. She saw a chiropractor, who told her that she wouldn’t be
able to train for six weeks. Lucy was devastated. Taking a rest period was difficult after she had gotten accustomed to challenging her body. But Lucy knew that diet had played an even bigger role in her fitness transformation than exercise, so she was able to keep taking care of herself by eating right while she was unable to train. Soon enough, she was back at the gym and working harder than ever before.

Now, weighing in at 153 pounds (and much of it hard-earned muscle), Lucy loves her body. She can perform exercises that she never thought she would be able to do, from her first pull-up to a 210-pound squat. She says, “I am still in awe of what the body is capable of, and I look forward to challenging it every month.

A health scare is sometimes an effective catalyst for change – just ask Lucy Elliott, a woman at the top of her game. 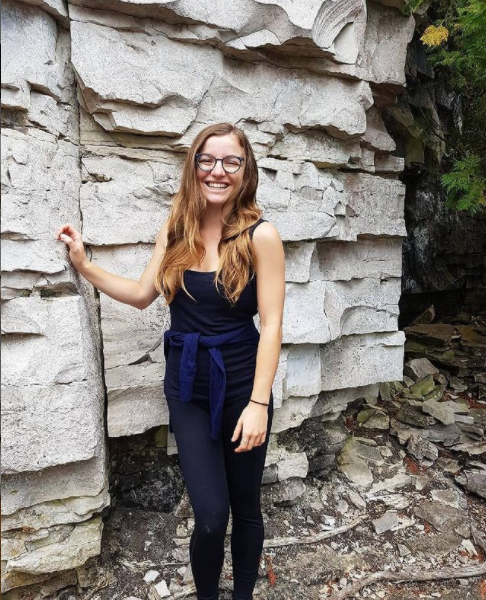